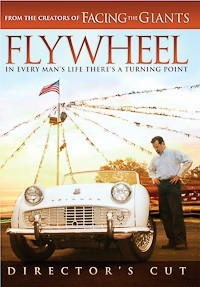 Jay Austin wants to sell used cars in the worst way ... and that's exactly how he does business at his dealership.

Promising much more than he can ever deliver, he'll do whatever it takes to sell a car. His manipulative ways permeate ll of his relationships—even his wife and son know they can't trust him.

He's more than happy with the way he does things ... until a pastor, who believes Jay has truly helped him, prays that God treats Jay the way Jay treats his customers!

As Jay works on restoring a classic convertible, he begins to understand that God wants to restore him as well.

Coming face-to-face with the reality of how he truly conducts himself, Jay Austin begins the ride of his life as he commits to honoring God with his business, his relationships, and his life!

Flywheel is the first movie made by Sherwood Pictures, the volunteer-driven moviemaking ministry of a church in Georgia.